At Carter Subaru in Ballard & Shoreline, Carter Volkswagen in Ballard and Carter Acura of Lynnwood, our customers’ satisfaction is the cornerstone of everything we do. It starts with understanding that Hassle-Free isn’t just a product you can sell… Hassle-Free is an attitude. It means taking pride in our reputation for providing quality and value, as well as honesty and integrity. We also know that price is a major factor when you purchase a vehicle, which is why all our new pre-owned vehicles are all priced fairly, clearly and honestly.

Carter Motors is also proud of our efforts to support our local community and to protect the environment. Since 2008 we’ve planted over 200,000 trees in the Mountains to Sound Greenway thanks to our customers, and we hope to be able to plant thousands more.

On the Road to Carbon Neutral

As part of our commitment to reducing our carbon footprint, Carter Motors has partnered with the Mountains to Sound Greenway Trust in planting a forest… one test drive at a time.
Native trees are critical to the health of the Pacific Northwest and the Puget Sound region. Trees improve air quality and reduce greenhouse gases, shade creeks and streams cooling water for threatened salmon, reduce erosion and filter pollutants, improving water quality, and providing important wildlife habitat.
Since 2008 Carter has planted over 200,000 trees in the Greenway – an area encompassing over 1.5 million acres of connected natural lands and vibrant urban areas from the Puget Sound all along I-90 over to Central Washington.
Here’s how it works: for every test drive taken at Carter Subaru, Carter Volkswagen or Carter Acura of Lynnwood, we’ll plant one native tree in the Greenway. For every car sold, we’ll plant 3 more trees, for a total of four. Why four trees? Because four trees that live a lifespan of about 75 years will absorb the approximate amount of carbon dioxide of the average car driven one year.
Join us in the Greenway in the fall and volunteer to plant these critical trees that help improve the ecological health of our local parks, natural spaces and riverbanks.
The Mountains to Sound Greenway is now officially a national treasure. After eight years of tireless advocacy, the Greenway has become America’s newest National Heritage Area (NHA). National Heritage Areas are places designated by Congress where historic, cultural, and natural resources combine to form cohesive, nationally important landscapes. The Mountains to Sound Greenway National Heritage Area proudly joins 54 other NHA sites in 32 states, including iconic and historic landscapes such as New York’s Niagara Falls, Mississippi’s Gulf Coast, and North Carolina’s Blue Ridge National Heritage Area.
Learn More About the Greenway 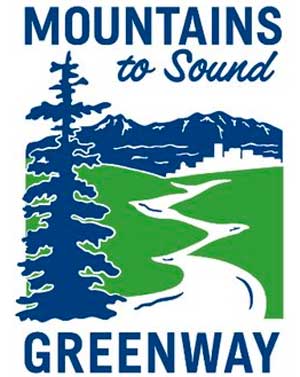 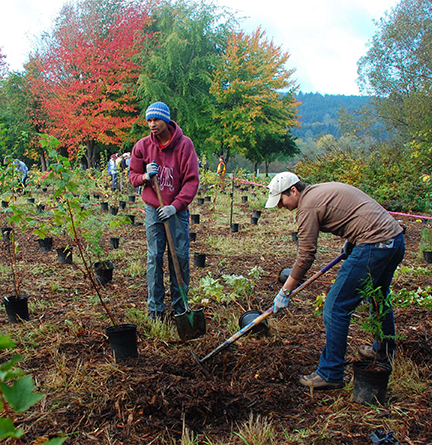 Made with ❤ by SeaMonster Studios